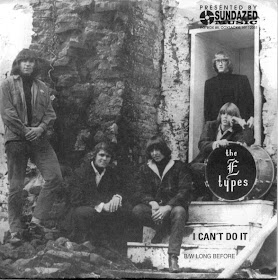 Left to Right...Don, Danny, Bob, Reggie & Jody (standing) The photo was on our first 45..on the Link Record Label. Later is was released on Dot Records. The Photo was taken in 1965 at the San Juan Baptista Mission in California. 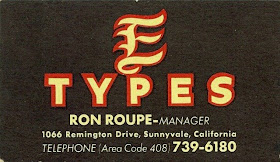 Now for the Biography of The E-Types!! (Thank you to Beverly Paterson)

San Francisco will forever by remembered as the City that basked in Psychedelic fog during the sixties, but journey down south a hundred miles or so and ask the residents of the farming Community Salinas what they recall most about the era, and there's a mighty good chance a high percentage of them with reply "The Music of the E-Types". Made up of Lead Singer and Rhythmn Guitarist Bob Wence, lead guitarist Don Shephard, Bassist Danny Monigold, Keyboardist Jody Wence and Drummer Reggie Shaffer, the legendary band testified to be hot stuff the moment they arrived on the scene, driving local audiences into a wild frenzy via their accomplished blend of Byrdisian Folk Rock and Merseybeat fashioned power pop.

Like so many bands of their generation, the E-Types encountered massive regional Fame, but they were never granted the opportunity to be heard outside their terrority. Had the band been properly promoted, there's no doubt their singles would
have stormed the airwaves far and wide! Beginning in the Spring of 1966 with the beautifully breezy "I Can't Do It" backed by "Long Before" an equally catchy slice of melodious garage pop, the E-Types became increasingly more assured with each disc they issued. The band's second record "She Moves Me," stood as a bubbly rocker, while the flipside "Love of The Loved" was an emotional treatment of an obscure John Lennon and Paul McCartney composition.

Though the E-Types were not shy went it came to tackling raw punk - and anyone who as fortunate enough to have seen the band LIVE can attest to their remarkable interpretations of Yardbirds tunes - their forte' clearly remained in the harmony department, fostered by vocals so spotless and impeccable.

The band's third single, "Put The Clock Back On The Wall," reared its head in 1967, and accurately captured the crazy hazy mood of the year. Devised of trippy lyrics scrawled by the ace songwriting team of Alan Gordon and Gary Bonner (The Turtles, Petula Clark, and the Lovin' Spoonful), the psychedelic pop classic bristled with tight orchestration, circled by the E-Types' signature pitch of right on choruses.

The band's final record ("Big City/"Back To Me") was released that Autumn. Cut of a feathery folk pop cloth, both songs were perceptively softer than any of the E-Types' previous endeavors.

In 1968, the band felt they had run out of gas and elected to call it quits. Alongside the four singles they released, the E-Types recorded a slew of material that never saw the light of day - until now that is! Sundazed Records (home of just about every under appreciated sixties pop, garage, and psychedelic band imaginable) in New York is getting ready to unleash a CD filled with nuggets, duly titled "Introducing The E-Types". On top of featuring a handful of demos that should have been issues as singles, the amazing record also involves live tracks, so timeless they're destined to send chills up your spine.